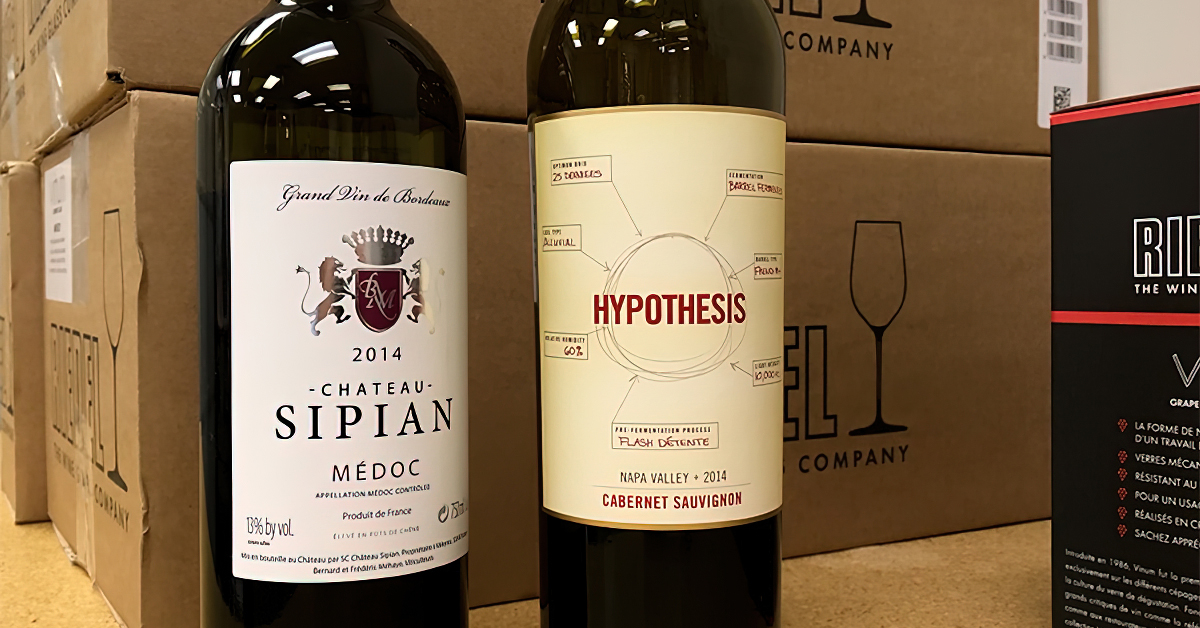 Sounds rather pedantic, no?

But imagine this: Say one of the bottles is “Ragú® Tomato Sauce,” and the other is a jar of fresh marinara from a little old lady in Italy, made from her own tomatoes. Same difference.

The bottle on the left was produced by a person farming his own fruit. And over the growing season he was constantly in the vineyard thinning leaves and making sure each grape met optimal ripeness. The fruit was harvested by hand, and taken to the winery with great care, where it was hand-sorted to make sure only the ripest fruit went to the crusher.

This bottle of wine also states who grew, produced, and bottled the wine, as well as where this all took place.

The bottle on the right tells us nothing about where the fruit was grown (other than a vague “Napa Valley” AVA). The technical details are spelled out on the bottle. “Optimum Brix” (a measure of sugar in the grapes) is listed (proudly) at 25 degrees. More on this in a moment.

Soil type is listed as “alluvial,” which doesn't tell us a whole lot — much of Napa's soils are “alluvial,” so still no indication on who farmed, or where farmed.

Fermentation is listed as “Barrel Fermented,” again not terribly helpful. Were they big oak tanks, or small barriques? Were the barrels new or were they neutral (having been used at least once before). The label states the barrels were “French,” but that can mean a lot of things as well; from which forest, which barrel manufacturer, “toast” levels, etc.

Oh, and the back label states that the resulting product was “Cellared & Bottled by Roots Run Deep Winery, Napa CA,” which tells us precisely nothing about who grew or made the wine (the term allows for a lot of leeway). The back label also has all kinds of nonsensical marketing hype about the processes used in production, and an indirect claim that the wine is packed with “value."

Back to “Optimum Brix.” I bring it up again because the “Pre-Fermentation Process” proudly listed on the bottle is “Flash Détente.” This term only recently came to my attention when one of our former employees (now a wine producer in the Trinity River AVA) stopped by last week, and mentioned it as the “latest thing” in “winemaking” (although recent experiments in New Zealand will likely supplant the process as the “latest thing;” microwaving the grapes, but I digress…)

Flash Détente was developed in France, exploited to great “success” in Italy and Australia, and brought to the U.S. in 2009. It is a process which extracts all the color and tannins in the grape skins without extracting tannins from the seeds. It does a whole lot more as well.

Methoxypyrazines (how d'ya like them apples?), are present in almost all varieties of vinifera grapes (all the grapes you ever heard of, as well as some 6,000 you've never heard of). They are responsible for “grassy” aromas in Sauvignon Blanc, and “bell pepper” in Cabernets Sauvignon and Franc, and Merlot, for example. They are detectable by most wine drinkers at levels as low as 2 parts per trillion (1ng/L), and found through mass spectrometry at levels as low as 0.15ng/L (less than one part per trillion). Pyrazines are potent! Oh, and they're most pronounced in under-ripe grapes. Further, they have been found to be reduced if the juice from the grapes is heated to at least 122 degrees.

The Flash Détente process is roughly this: In a rather complex contraption, the grapes are flash heated to about 185-200 degrees, and then sent into a vacuum tank where they are cooled. The change in temperature and pressure causes the grapes to explode instantaneously, on a cellular level. This extracts the color and tannins, and “sterilizes” the juice.

The process also creates a steam of water which is loaded with Pyrazines and other aromatic compounds such as rot, mildew, “smoke taint” (forest fires near vineyards, for example), and exhaust fumes (think about the vines planted around Route 29 in Napa which see high volumes of tourist and truck traffic). This water is collected in a condenser which gathers the steam and discharges it into another container as “flash water.” When releasing the water component, the “brix” (the measured level of sugar in the juice) rises. So, the “Optimum Brix” listed on the label of the “not wine,” doesn't tell you anything about the ripeness of the grapes on the vine (which is how these things are touted in California).

Essentially the process allows for the juice from the grapes to be disassembled and reassembled based on what the “winemaker” believes will sell, or garner the coveted “90 point+” rating from the various wine rating “authorities."

The system was originally designed and used in Europe for large industrial producers to alleviate the vagaries of the growing season. It makes it possible to use under-ripe, industrially-farmed fruit to produce a “commercially acceptable product,” which is largely sold in boxes at Carrefour and other large retail operations. It is food processing. It is not “winemaking” as any of our producers or customers would understand the term. Further (again), the “not wine” was purchased by me for $36 at the local Total Wine. The real wine is $24 on the shelf in our stores.

How Steep Is That Vineyard?

Greg visits the Halenberg in the Nahe with winegrower Frank Schonleber. Frank and his father, Werner…

Training Vines In The Halenberg

"Tuscany's strength, like that of any wine producing region, lies in the typicity of the wines, t…

You are currently shopping in the store!

If you want to shop from one of our other locations shown below, your current shopping cart will be cleared - you may only shop and checkout from a single location at a time.

(Just across the river from Philadelphia) for in-store pickup, or shipping within the State of New Jersey.

For in-store pickup only.

Our New York store has just opened in Industry City, a vibrant community of innovative companies in Brooklyn. We offer both in-store pickup or delivery.