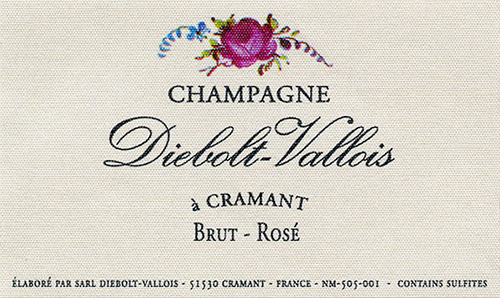 Jacques Diebolt himself provided the fiche technique: 53%, Pinot Noir, 27% Chardonnay, and 10% Meunier, mostly from Les Toulettes, blended with 10% Pinot Noir in the form of still red wine from Bernard Tornay’s Grand Cru vineyard in Bouzy. Dosage is a modest 7 gl.

First, use a well-shaped, real wine glass. Tall, skinny “champagne flutes” that famously “preserve the bubbles” (yawn) make it almost impossible to actually smell or taste the wine. The color is a limpid, saturated, watermelon pink, with a fine streaming bead of tiny precise bubbles. At first, the elegant nose suggests ripe red raspberries laced with myrtle-leaved oranges and lilac, with Rainier cherries, fresh fennel, and freshly baked sourdough moving in and out of the foreground as the wine evolves in the glass. On the palate, the wine is elegant, sleek, and almost creamy, with flavors that echo the nose, including more red raspberries, wild strawberries, and persimmon, and a fine, long clean finish carried by lively red berry acidity and the feathery, delicate mousse. About this wine producer: When I was first invited to pour this creamy Champagne Blanc de Blanc at George Perrier’s Le Bec-Fin in Philadelphia, I was admitted into a very privileged club: sommeliers at restaurants like Marc Meneau’s L’Espérance in Père-sous-Vézelay, and Gerard Vié’s Les Trois Marches in Versailles. At the time, there were only six hectares of vines, all on the southeast-facing slope below Cramant, which meant there was very little wine available. Even private customers, who drove to Cramant from Paris or Brussels after tasting the wine in a Michelin-starred restaurant, were often disappointed to find nothing for sale at Diebolt-Vallois. More became available when Diebolt acquired vineyards in Chouilly and Le Mesnil-sur-Oger (“putting the family in debt for 100 years,” he chuckles). But more supply only attracted more sommeliers, including Eric Beaumard, the 1992 Meilleur Sommelier de France, and the 1994 Meilleur Sommelier d’Europe. Every year, he buys more than 200 cases for the cellar at Georges V in Paris. But Jacques Diebolt always seems to have wine for us, and even came himself to help us kick off Moore Brothers with a visit to Pennsauken more than twenty years ago.