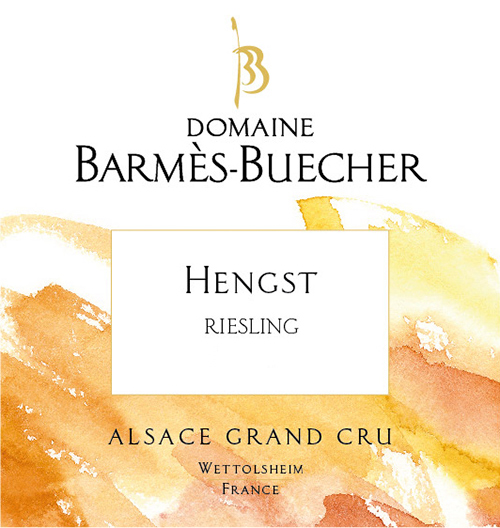 The wine comes from a 40-year-old parcel of Riesling on the mid-slope of the south-facing Grand Cru Hengst, where rich, marly limestone soil encourages powerful structure and concentration, along with exotic citrus and yellow orchard fruit aromatics seasoned with salty minerality.

In the glass, the wine has a beautiful, saturated yellow gold color. Baked pineapple, roasted pears, lemongrass, and crystallized honeycomb, along with white truffles, grated ginger, and chamomile alternate with rose petals, white grapefruit, and hints of fresh basil, all moving in and out of the background as the nose evolves in the glass.

On the palate, the wine is concentrated and fleshy, with deeply embedded citric acidity, a sensuous, creamy texture, and rich, layered flavors that echo the nose, all seasoned with the exotic saline minerality that is characteristic of Maxime’s wines. About this wine producer: In 1985 Geneviève (Buecher) and François Barmès formed their domaine from the combined land of their families, who had owned vines in the Alsatian town of Wettolsheim since the 17th century. François Barmès wholeheartedly embraced the Austrian philosopher Rudolph Steiner’s belief in the interdependence of the forces of life, earth, and the cosmos. So in 1995, in order to undo the damage caused by decades of chemically dependent viticulture, he began the transformation of his vineyards to biodynamics. Today his son Maxime carries on with the same commitment to grow the most exciting, terroir-expressive wines in Alsace, taking the discipline of biodynamics a step further: now, whenever possible, he uses a horse in the vineyards instead of a tractor.