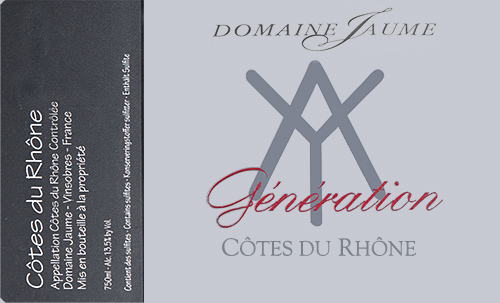 Normally reserved for private customers and restaurants in France, Génération is a typical Vinsobre blend of Grenache, Syrah, and Mourvèdre, mostly grown on the clay-limestone slopes of “Coteaux,” with a healthy dallop of old-vines Grenache from “Altitude 420,” a windswept terrace on “Les Collines.” In the glass, the wine has a limpid, deep purple color, with flashes of magenta at the edge. The aromatics are pure garrigue – with sun-warmed black cherries, Damson plums, lavender, rosemary, and hibiscus tea, all moving in and out of the foreground as the wine evolves in the glass. On the palate, a generous core of juicy black and red fruit, bracketed by high altitude, almost saline minerality echoes the nose, and the finish is mineral-infused and long, seasoned with just a suggestion of freshly ground black and white pepper. Drink now – 2027.