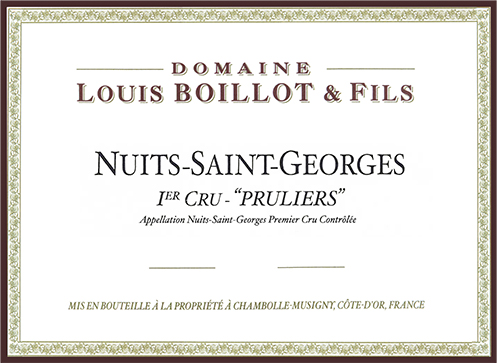 Boillot’s Les Pruliers, “the best wine in the (Boillot) range” according to Allen Meadows, comes from a small parcel of 100+ year-old vines grown on a south-facing slope just up the hill and south of the village of Nuits-Saint-Georges. In the historic 2019 vintage, Boillot produced a breathtakingly beautiful Les Pruliers that won’t fade in a carafe, so if you open a bottle within the next ten years, don’t be afraid to decant it, and be sure to use a good large glass. The wine has a saturated dark crimson red color, which cools to bright fuchsia just at the edge. Fresh aromas of red and black fruit, including red raspberry preserves, candied black cherries, and crushed red peonies, along with fresh white tobacco, freshly turned loam, and a faint suggestion of freshly cracked black peppercorns. On the palate, the wine is supple and elegant, with a solid core of mineral-saturated red and black fruit flavors that echoes the nose, sometimes adding grated mandarin zest, cardamom, and allspice as the wine grows more voluminous over time. Drink now–2045.

About this wine producer: Louis Boillot’s seven-hectare estate is half of the original Domaine Lucien Boillot of Gevrey-Chambertin. In 2002, the domaine was split equally between Louis and his brother Pierre, who continues operations at Domaine Lucien Boillot. But in 2003, shortly after their father’s retirement, Louis left the winery in Gevrey, and with his wife, Ghislaine Barthod, a famous and highly respected winegrower in her own right, purchased a lovely old house with a perfect, functional cellar in Chambolle-Musigny. Today, Ghislaine Barthod and Louis Boillot make their wines side by side in the same cellar. Both have unusually old vines; Ghislaine’s vineyards all in Chambolle-Musigny, and Louis’ in eight communes stretching the entire length of the Côte, from Fixin through Gevrey-Chambertin, all the way south to Volnay. Their son Clément will one day inherit a combined domaine that will be one of the greatest in all of Burgundy.