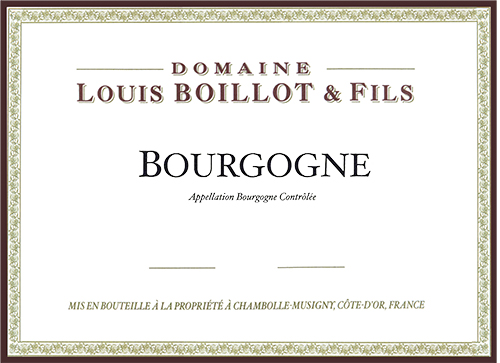 In a good large Burgundy glass, the wine has a saturated almandine color, with flashes of crimson just at the edge. Fresh aromas of cool red and black fruit, including red currants, wild plums, and white cranberries move in and out of the foreground, later alternating with delicate suggestions of fresh white tobacco, faded peonies, and sage as the nose evolves in the glass. On the palate, the wine is fresh, layered, and elegantly textured, with a compact, succulent core of mineral saturated red and black fruit flavors that echo the nose, all seasoned with a fine, extended thread of cardamom, dried morel mushrooms, and freshly grated nutmeg. Easily a middle-distance runner, this sensational Bourgogne remains silky, transparent, and vibrant as it grows more voluminous and compelling in the glass; the long, harmonious finish promising at least another decade in a dark cool cellar. Another perfect example of the kind of Burgundy that motivates growers around the world to try their hand at Pinot Noir.

About this wine producer: Louis Boillot’s seven-hectare estate is half of the original Domaine Lucien Boillot of Gevrey-Chambertin. In 2002, the domaine was split equally between Louis and his brother Pierre, who continues operations at Domaine Lucien Boillot. But in 2003, shortly after their father’s retirement, Louis left the winery in Gevrey, and with his wife, Ghislaine Barthod, a famous and highly respected winegrower in her own right, purchased a lovely old house with a perfect, functional cellar in Chambolle-Musigny. Today, Ghislaine Barthod and Louis Boillot make their wines side by side in the same cellar. Both have unusually old vines; Ghislaine’s vineyards all in Chambolle-Musigny, and Louis’ in eight communes stretching the entire length of the Côte, from Fixin through Gevrey-Chambertin, all the way south to Volnay. Their son Clément will one day inherit a combined domaine that will be one of the greatest in all of Burgundy.