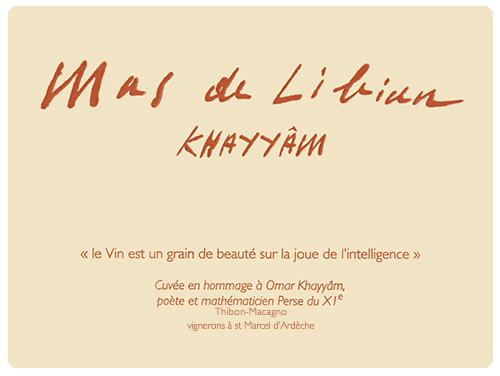 The wine is a blend of old-vines Grenache (75%) and Syrah (15%), with an important component of low pH Mourvèdre (10%) that gives the wine its bright mineral lift. The vineyard surface is galets roulés (large egg-shaped quartzite pebbles) to a depth of almost two meters, and the vines produce only about 25 hl/ha. In the cellar, the grapes are fermented in temperature-controlled stainless steel, and 40% of the wine is matured for ten months in large neutral oak foudres. In the glass, the Khayyâm has an intensely saturated red violet color, almost blue-black at the center, and glowing bright crimson at the edge. The nose opens with aromas of sun-warmed black cherries, Damson plums, dried strawberries, and hibiscus tea, sometimes alternating with suggestions of lavender, rosemary, coriander, and licorice bark as the wine evolves in the glass. On the palate, the wine is lively and fresh, with a sweet core of black and red summer fruit that echoes the evolving exotic nose, including dried cranberries, ripe cassis, and a basket of dried flowers and spices, all seasoned with palpable saline mineral brightness and refreshing vibrancy. The mouth-coating flavors gain weight over time in the glass, and the wine has a round, dusty-velvety finish.

About this wine producer: Jean-Pierre Thibon’s family has operated the Mas de Libian in Saint-Marcel d’Ardèche since 1670. He and his cardiologist wife, Jacqueline, have three daughters: Hélène, Catherine, and Cécile. In 1995, Hélène, Catherine, and Hélène’s husband Alain Macagno assumed responsibility for viticulture and winemaking, and began to estate-bottle the wine, rather than sell it in bulk to négociants. Long before it was fashionable, the Mas de Libian was an organic farm, and in 2005 Hélène introduced the demanding practice of biodynamics. Catherine does much of the vineyard work herself, with the help of “Nestor,” a charming Comptois draft horse who is encouraged by his canine stable mates “Sophia” and “Éclair.”