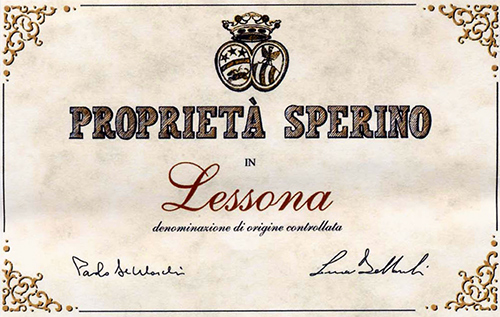 Lessona is comprised of 100% Nebbiolo, sourced from what Luca De Marchi says would be the two Grand Cru vineyards in the region (if a classification ever occurs), Covà and Monfalcone. After rigorous selection of fruit, the grapes were de-stemmed and pressed softly to favor the aromatic profile of perfectly ripe Nebbiolo in this excellent vintage. The wine is matured for thirty-two months in barrels of various sizes, and then aged in bottle for another year in the cellar.

In the glass, the wine has a saturated, deep ruby red color that gradually warms to red mahogany at the edge. Sweet amarena cherries, dried rose petals, rosemary and pine needles emerge on the nose, seasoned with a faint suggestion of sweet herbs, baking spices and wild mint as the wine spends time in the glass.

On the palate, the wine is powerful, but with a silken finesse, with a core of succulent red and black fruit flavors that echo the nose, all of which is seasoned by a persistent mineral acidity that carries the flavors through a seemingly endless finish.

About this wine producer: According to Il Corriere Vinicolo, Italy’s “wine Wall Street Journal,” the “Spanna” (Nebbiolo) grown a hundred years ago by Paolo De Marchi’s great, great uncle was the most expensive wine in Italy. Today, after ten years spent replanting the vineyards and renovating the winery, Paolo and Luca have given new life to Proprietà Sperino, and stimulated a renaissance of viticulture in this historic wine-growing area. The eight hectares of vines at Proprietà Sperino are mostly in the district of Ori, so-called for the deep yellow marine sand that lies on the sun-drenched, sub-alpine plateau of Orolungo. If you scoop up the soil only a half-hour after a rainstorm, it slips through your fingers like sand in an hourglass.