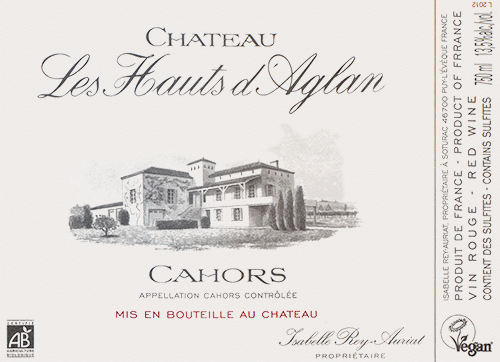 The wine has a glass-staining inky purple color, almost opaque at the center, with flashes of garnet at the edge. The nose is elusive at first, then unfurls with aromas of ripe black currants, brandied griotte cherries, fresh forest mushrooms, and eucalyptus, with dried rosemary, fennel seed, fresh white tobacco, and ground black peppercorns moving in and out of the foreground as the wine evolves in the glass. On the palate, the wine is all muscle, without an ounce of fat: the palate coating, full-throttle substance tightly framed by submerged, dusty round tannins, while the refreshing, limestone-buffered acidity carries the sweet black cherry flavors through a long, harmonious finish. Drink now–2030.

About this wine producer: The vines grow on south-facing terraces high above the right bank of the Lot in Soturac, in the extreme west of the Cahors appellation, where Malbec has grown since at least the Middle Ages. The Martinet family has owned the estate since the nineteenth century, and it was Isabelle Rey-Auriat’s grandfather, Roger Martinet, who developed the market for the wines by transporting them in barrel by barge to Bordeaux. IsabelleRey-Auriat inherited the fourteen-hectare estate from her mother, and is deeply committed to traditional Cahors, its unique terroir, and to Malbec. She is also a tireless advocate for small-farm wine growers. From 1995 until 2000 she served as President of the Vignerons Indépendants du Lot, and was a founding member and the first President of the Fédération Interdépartementale des Vignerons Indépendants de Midi-Pyrénées. In 2007 she was inducted as a Chevalier dans l’Ordre National du Mérite Agricole.