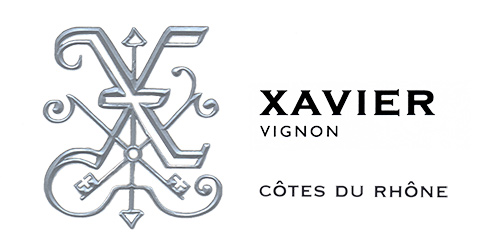 This deep ruby Côtes du Rhône is a blend of 85% old-vines Grenache (planted more than eighty years ago), with 10% Syrah, and 5% of Xavier’s signature low pH Mourvèdre. The grapes were hand-harvested in 76 parcels of varied soils, including galets roulés, clay-limestone, and sand, and the wine was fermented and matured in concrete tanks.

In the glass, the wine has a not-quite-opaque dark ruby color, with soft-edged flashes of crimson at the edge. Aromas of blackberry preserves, crushed peppercorns, smoked salt, and a cornucopia of herbes de Provence and spices move in and out of the foreground, sometimes alternating with suggestions of balsam fir, black currants, and dried rosemary as the nose evolves in the glass. On the palate the wine is balanced, clean, and refreshing, with juicy black fruit flavors that echo the nose (especially the unmistakable suggestion of kalamata tapenade). The aromatics and flavors gain weight over time in the glass, and the wine has a sleek, velvety finish. Drink now – 2029. About this wine producer: As the technical director and head enologist at “Laboratoire Avignon Oenologie Conseil,” Xavier Vignon is the consulting winemaker at more than 300 estates, including most of the best-known domaines in Châteauneuf-du-Pape. In lieu of payment for his laboratory’s service, he sometimes accepts wine, which the micro-négociant company he established in 2002, “Xavier Vins,” uses to produce exceptional wines of the southern Rhône Valley. Originally a physical chemist, Xavier is particularly interested in how the spectrum of dissolved mineral salts in the groundwater of each vineyard, which varies from parcel to parcel, influences the expression of terroir in the grapes. “I’m a trained enologist,” he says. “I’ve examined wine down to the molecular level. Which, in the end, convinces me that what is most important are the vines, the depth of the roots, and the health and balance of the vineyard.”