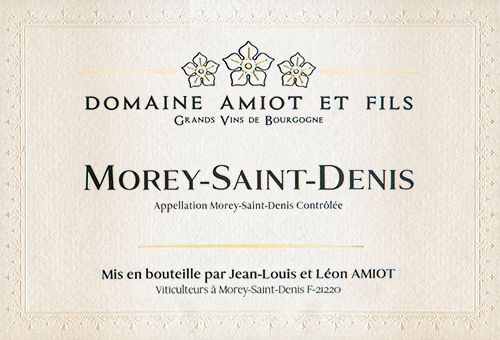 In a good large Burgundy glass, the Morey-Saint-Denis has a saturated almandine color, with flashes of crimson just at the edge. Fresh aromas of ripe raspberries, wild strawberries, candied black cherries, and white cranberries move in and out of the foreground, sometimes alternating with sun warmed Damson plums, rhubarb and a faint trace of lilacs as the nose evolves in the glass.

On the palate, a dense and opulent core of refreshing, mineral-saturated flavors echo the nose, adding fresh sweet herbs, grated orange zest, and cardamom as the wine grows more voluminous with time, always remaining firm, taut, transparent, and vibrant. This is another perfect example of the kind of Burgundy that motivates winemakers around the world to try their hand at Pinot Noir.

About this wine producer: Brothers Didier and Jean-Louis Amiot represent the fifth generation of their branch of the Amiot family growing wine in the Côte de Nuits. Currently, they farm forty individual parcels in Morey-Saint-Denis and Gevrey-Chambertin, some of which are more than seventy-years-old. There are eight hectares in total, including vines in five Premiers Crus and two Grands Crus.

The grapes are hand-harvested, sorted at the winery, and depending on the vintage, between 70% and 100% are destemmed. The wines ferment on the ambient yeast for ten days in thermoregulated tanks, and are matured for fifteen to eighteen months in oak barrels, of which 30% for the Premiers Crus, and 50% for the Grands Crus are new. There is only one racking, and the wines are bottled unfiltered. Their entire annual production is a minuscule 2,500 cases in most vintages.