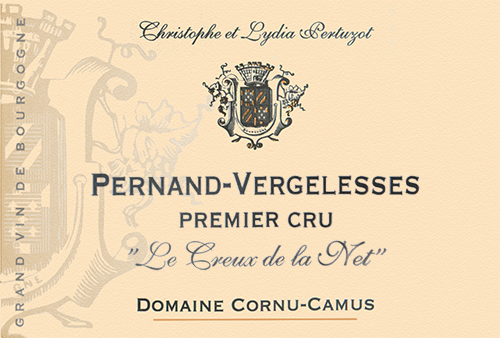 This super-elegant Pinot Noir comes from a tiny parcel of 60-year-old vines in “Le Creux de la Net,” the smallest of the five Premiers Crus of Pernand-Vergelesses, which is located just south of the village on a slope of terres blanches that faces the hill of Corton. In the glass, the wine has a saturated, deep garnet red center, with flashes of cobalt at the edge. When the wine is first poured, aromas of griotte cherries, pomegranate, hibiscus, and brown mushrooms emerge from the glass. Later, sun-warmed red plums, strawberry preserves, and cocoa are joined by marzipan, eucalyptus, and sage, as the vital, complex nose evolves in the glass. On the palate, the wine is sleek and elegant, with a dense core of complex sweet black and red fruit seasoned with freshly grated nutmeg, which fans out like a peacock’s tail, and is framed in round, velvety, ultrafine tannins and refreshing minerality. Drink now–2035.