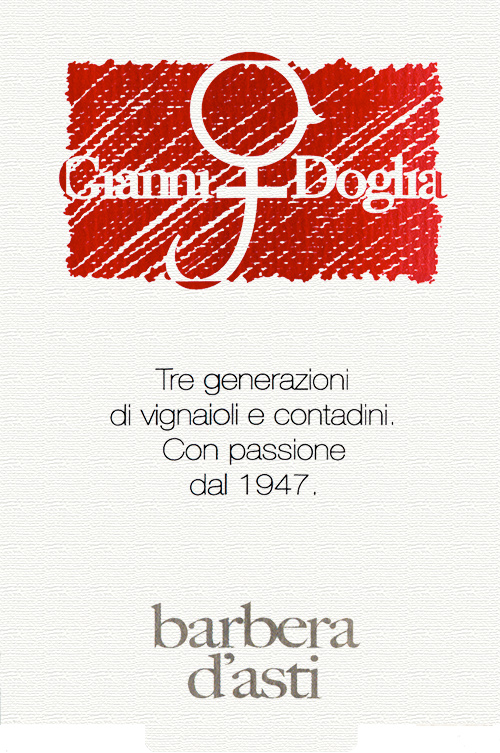 The hand-harvested grapes for this beautiful wine are sourced from vineyards of up to sixty years of age (planted originally by Gianni's grandfather). Less than four hundred cases are produced each vintage.

In the glass, the wine has a saturated ruby color, with flashes of violet towards the edge. Sun-warmed amarena cherries, wild blackberries and allspice emerge on the nose, adding dried herbs, cinnamon, and rose petals, as the wine spends time in the glass.

On the palate, the wine is supple and generous, with a core of sweet red and black fruit flavors that echoes the nose, along with suggestions of rosemary, thyme, freshly ground pepper, and vibrant berry acidity which persist through a long, silky finish.

About this wine producer: Eugenio Rivella, Gianni Doglia’s maternal grandfather, was a sharecropper in 1947 when he purchased this 10-hectare farm in Castagnole delle Lanze. His ambition was to vinify grapes that he grew on his own land. Now representing the third generation at the estate, Gianni Doglia is one of the leading growers in the region of Monferrato, especially celebrated for his Tre Bicchieri awarded Moscato d’Asti, which is often called the finest wine of its kind in the region.   The organically farmed vineyards, which lie on calcareous soil at an elevation of 320-360 meters, are among the highest in Asti. They include five hectares of Moscato Bianco, with the other five divided among smaller parcels of Barbera, Nebbiolo, and Grignolino. Gianni Doglia is an active member of The Green Experience, which assists winegrowers in implementing sustainable practices in viticulture.