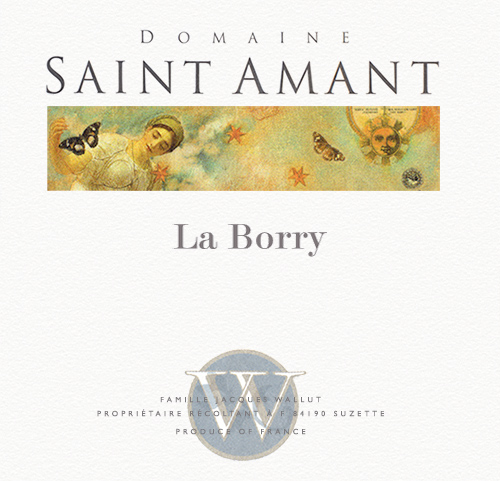 The vines that produce this unique white Côtes-du-Rhône, made from 90% Viognier and 10% Roussanne, were planted in the early 1990s on the advice of the Châteauneuf-du-Pape enologist Noël Rabot. Included is a parcel of Viognier growing on a Mistral-swept terrace at 620 meters, which is the highest vineyard in all the Côtes-du-Rhône. In the glass, the wine has a limpid, pale yellow-gold color. Aromas of white nectarines, crystallized ginger, peach blossoms, and honeysuckle move in and out of the foreground, sometimes alternating with Golden Delicious apples, salted melon rind ripe, fresh basil, and dried orange zest, as the nose evolves in the glass.

On the palate, the wine is almost creamy, with a briny mineral-saturated core of stone-fruit flavors that echoes the nose, all delicately seasoned with bitter almond, preserved lemon, and a fleeting suggestion of dried coriander. Later, discreet apricot pit bitterness, along with white peach acidity, lengthens the creamy finish.

Drink with simple, elegant preparations of seafood, vegetables, and poultry. (When Viognier from Condrieu finally became available for my wine list at Le Bec-Fin, I recommended drinking it alongside Georges Perrier’s quenelles de brochet, the airy, weightless, poached dumplings of in a lobster sauce, which was his signature dish.)