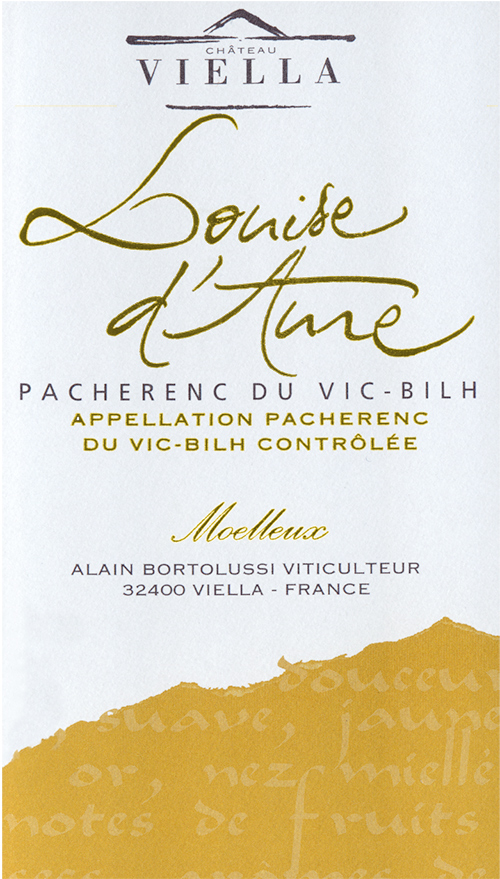 The Louise d’Aure is comprised of 50% Petit Manseng, and 50% Gros Manseng, grown in a one-hectare parcel of south facing, gradually sloping gravelly clay. The partially shriveled grapes (raisins passerillés) are hand-harvested beginning at the end of October, with some of the Petit Manseng gathered as late as mid-November. The wine components ferment slowly in temperature controlled stainless steel tanks, and mature there for six to eight months before bottling. In the glass, this radiant, honey-gold Pacherenc du Vic-Bilh unfurls with compelling aromas of candied pineapple, raw honeycomb, fresh tarragon, and crème anglaise, which alternate with more fleeting suggestions of ripe white peaches, toasted almonds, and walnut oil, as the nose evolves over time. On the palate, the wine is juicy, clean, and sweet, with a dense core of flavors that echo the nose, adding honey drizzled citrus, poached pears, and Maldon salted caramel, all seasoned with palpable minerality and bright orchard fruit acidity, which carry the flavors through a long, persistent, and refreshing clean finish.

About this wine producer: In 1952, Alain Bortolussi's grandfather, an immigrant from the Veneto, purchased the eighteenth-century château and the surrounding 25 hectares of vines, which had just been classified under AOC regulations as Madiran and Pacherenc du Vic Bilh. At the time, it had almost no value. Over the next thirty-five years, most of the estate was replanted with the best clones of Tannat and Cabernet Franc for the Madiran, along with a tiny one-hectare parcel of local white varieties for the Pacherenc du Vic-Bilh. Alain, who is the first to bottle wine at the estate, took charge in 1991. When I met him in 2013, he was just completing the restoration of the château. In 2016, his daughters, Claire, and Marion, joined Alain at Château Viella, and in 2019, on Alain’s nominal “retirement,” have taken the reins of this jewel of a winegrowing estate.