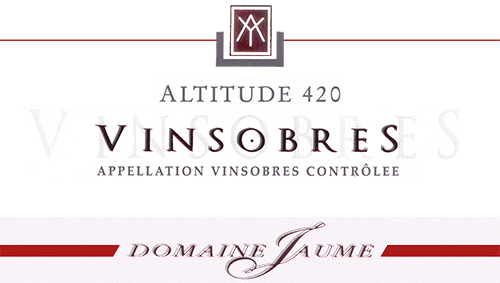 Harvested in 2017, “the vintage of my lifetime,” according to Xavier Vignon, Altitude 420 is a blend of 60% Grenache and 40% Syrah, grown on a windswept terrace in “Les Collines,” one of the four Crus of Vinsobres, which towers over the medieval village. The grapes are destemmed and fermented in stainless steel tanks, where they macerate for fifteen days, and a part of the wine is matured in large oak barrels. In the glass, the wine has a deep royal purple color, almost black at the center. Aromas of sun-warmed crushed black fruit, including brandied cherries, black raspberries, red currant preserves, and Damson plums move in and out of the foreground, with secondary garrigue aromatics of morel mushrooms, black olives, roasted chicory, and dried lavender emerging as the wine evolves in the glass. On the palate, this wonderful Vinsobres puts on weight as the wine evolves over time; the brambly red and black fruit seasoned with palpable high altitude minerality, like a northern Rhône Syrah. The persistent mineral finish, seasoned with fleeting suggestions of smoked charcoal and crushed walnuts, seems endless. Drink now–2027.