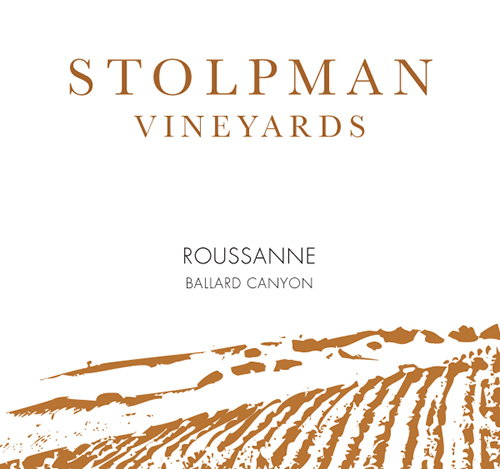 The Ballard Canyon Estate Grown Roussanne is comprised of 88% Roussanne and 12% Chardonnay, grown in four parcels of vines planted on the limestone outcropping at Stolpman Vineyards in 1992. The wine was fermented and matured for nine months in 500-liter French oak puncheons, of which 30% were new.

In a good large glass, this opulent Roussanne has a limpid, intensely saturated lemon gold color, with flashes of green gold just at the edge. Penetrating aromas of sun-warmed white peaches, ripe golden pineapple, and orange blossoms, along with honeyed chamomile, toasted pine nuts, and crystalized ginger move in and out of the foreground, adding fleeting suggestions of jasmine and dried honeycomb seasoned with baking spices, nutmeg, and thyme. On the palate, the wine is lush and multi-layered, at the same time, light on its feet, with a delicious, creamy texture, and a solid, shimmering core of limestone-infused Roussanne flavors, including mango, buttercream, Cavaillon melon, and basil, as if it were a white Châteauneuf-du-Pape that had been amplified by the Ballard Canyon sun. Drink now – 2030, at just a bit cooler than cellar temperature. And give it time. This terrific Roussanne is another example of a fine wine that puts on weight as it evolves in the glass.

About this wine producer: Pete Stolpman’s unique estate, founded in 1990 by his father, Tom Stolpman, is located on a rare limestone outcropping in the heart of Ballard Canyon, has provided grapes to such extraordinary producers as Manfred Krankl at Sine Qua Non, and Adam Tolmach at the Ojai Vineyard. In 2001, Tolmach’s protégé Sashi Moorman joined Stolpman as winemaker, and continues as a working consultant. Today, the entire production is estate-bottled. With ten-year Ballard Canyon veteran winemaker Kyle Knapp in charge of winemaking, and Ruben Solorzano, called “the vine whisperer” by the Santa Barbara Independent overseeing viticulture, Stolpman Vineyards is producing some of the most profoundly beautiful estate-bottled wines in California.