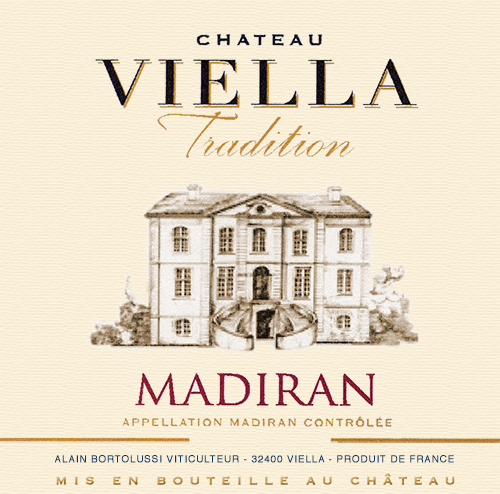 In the glass, the Madiran Tradition has a dark purple color, almost black at the center, with flashes of garnet just at the edge. The nose unfurls gradually, with aromas of sun-warmed blackberries, cassis liqueur, wood smoke, and fresh white tobacco moving in and out of the background, adding fleeting suggestions of black licorice, cardamom pods, birch bark, and cloves, as the wine evolves in the glass. On the palate, the wine is fresh, vibrant, and juicy; yet sinewy, without an ounce of fat. And the flavors echo the nose, expressing the unmistakable terroir of Madiran – with juicy, juicy blackberries, prune plums and tea leaves. Sleek ripe tannins frame the mineral-laced flavors, which are carried through a long persistent finish by the beautifully integrated fresh-berry acidity.

About this wine producer: In 1952, Alain Bortolussi's grandfather, an immigrant from the Veneto, purchased the eighteenth-century château and the surrounding 25 hectares of vines, which had just been classified under AOC regulations as Madiran and Pacherenc du Vic Bilh. At the time, it had almost no value. Over the next thirty-five years, most of the estate was replanted with the best clones of Tannat and Cabernet Franc for the Madiran, along with a tiny one-hectare parcel of local white varieties for the Pacherenc du Vic-Bilh. Alain, who is the first to bottle wine at the estate, took charge in 1991. When I met him in 2013, he was just completing the restoration of the château. In 2016, his daughters, Claire, and Marion, joined Alain at Château Viella, and in 2019, on Alain’s nominal “retirement,” have taken the reins of this jewel of a winegrowing estate.