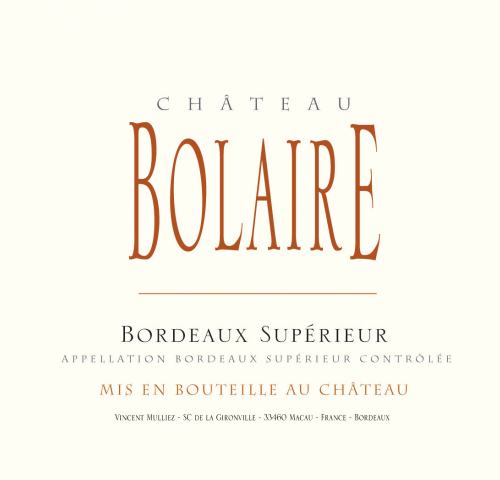 With so much Petit Verdot in the blend, the Château Bolaire has a lustrous royal purple color, with flashes of bright crimson at the edge. Floral aromas of crushed violets and faded rose petals, along with griotte cherries, sun-warmed blackberries, and pan-wilted basil sometimes alternate with crème de cassis, melted dark chocolate, and black truffles, as the exotic nose evolves in the glass: like a tarte aux myrtilles just out of the oven.

On the palate, the wine is juicy and sleek, with a succulent core of racy, very fresh red and black fruit,along with fleeting suggestions of fennel, roasted coffee, and dark chocolate that echo the evolving nose. Restrained silky ripe tannins, and the bright minerality and intertwined berry acids of the Petit Verdot keep it nimble and refreshing. Drink now through 2030.

About this wine producer: The seven-hectare vineyard of Château Bolaire is planted on a strip of well-drained sandy red clay in Macau, which, before the Dutch drained the marshes of the Médoc in the seventeenth century, was an island in the Gironde. The château was built in 1860, and after phylloxera, the vineyard was planted in a very unusual encépagement that includes more than 50% Petit Verdot. Some of the vines are over ninety years old. In 2003 Vincent Mulliez, a native of Bordeaux who had worked as an investment banker in London purchased Château Bolaire, along with Château de Gironville and Château Belle-Aire where the wines are made. Regrettably, Vincent Mulliez died unexpectedly in the spring of 2010 at the age of 44, and never tasted the finest wines of his much too short career.